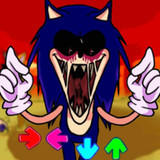 SONIK.EXE is one of the new antagonists in Friday Night Funkin\’. In the game FNF SONIK.EXE Mod Test you have to control this particular hero. It is different from the usual Sonika. His fur turned dark blue, his eyes turned into even spots with small pupils, his mouth began to stand out with a wide black and evil smile. But the main difference is the blood that flows from his eyes.

What to do in FNF SONIK.EXE Character Test? You need to score as many points as possible. How to do it? Before starting the game, select the hero state and music that you like best, and then click play. After starting the game, click on the arrows on the screen of your device. As soon as you click on the arrow, the hero will sing a note and make a certain movement, and you will be awarded points. If you scored 800 points, this is a good result of the game. If you managed to score more than 1000 points – you are great at playing FNF SONIK.EXE Mod Test.

In the game FNF SONIK.EXE Character Test has its own nice features. You can choose the state of the hero that you like best and songs for him. You can turn off the background music so that only the main character\’s voice can be heard. To do this, just press the button in the form of a beep on the screen of your device. If you like the game, you can share it with your friends and arrange competitions. Find out who is the best player and can score the most points!